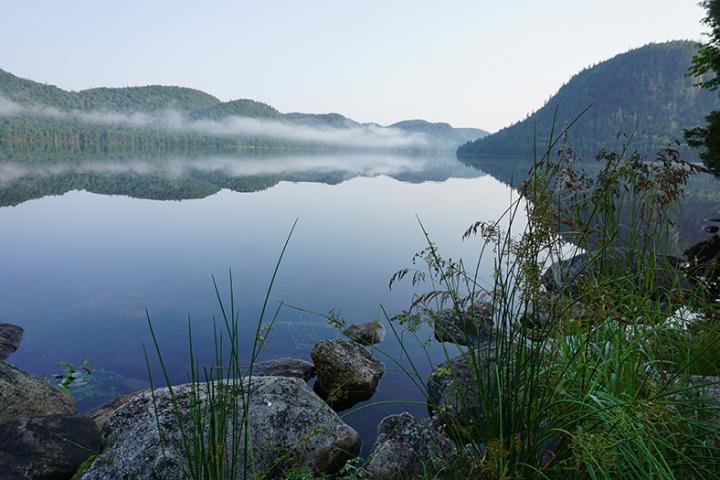 Soon after moving to Washington DC, I found myself in a bar with Erin Savage and Margaret Williams getting fired up about the idea of a Magpie River Expedition. Having just accepted my first desk job, the thought of having a multi-day wilderness trip on the books was something I couldn't turn up! Quickly the idea turned into a serious plan and bug nets were purchased, meal plans created and float plane reservations made. In the week leading up to the trip, we were all fully prepared for the adventure. Unfortunately, just days before departure, the water level, which was already high, kept rising. When we asked for advice from notoriously hard-core kayaker Adam Herzog, who paddled the Magpie years previously, he informed us that we while we "would probably survive, it's not recommended." For perspective, Adam is well known for many feats, including but not limited to, doing three laps on Linville in a single day. When Adam does not recommend you put on a multi-day river in the middle of no-where Canada at high water, you listen. So it was time for plan B.

The good news is that plan B was still an awesome plan! Instead of doing one river for 8 days, we would spend the time road tripping around Quebec in search of lots of different classic rivers. Since none of us had spent much time kayaking in Quebec before, we were all stoked for the new plan. Margaret and I left DC after work on Friday and began our drive North. Erin and Toby were already in Canada and picking up Steve from the airport. We all rendezvoused the next morning at the takeout of our first river. 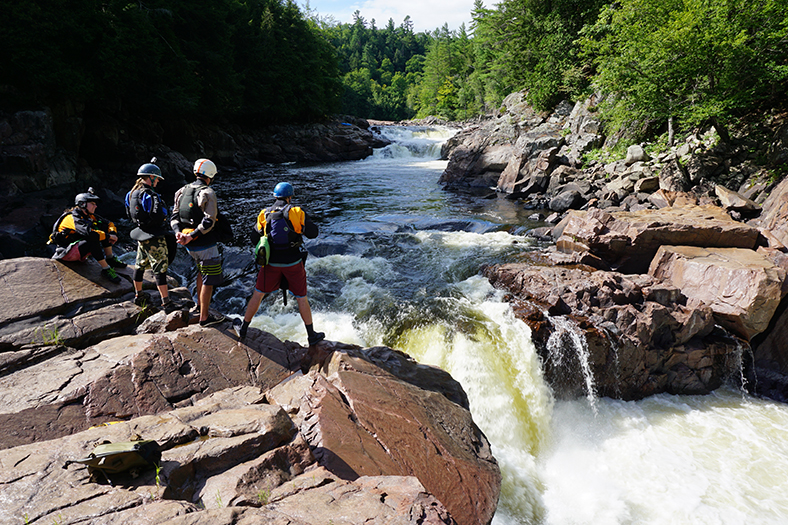 The first river on our hit list was the Rouge. It was a bit further south and a short run, so a perfect option for coming off a long drive. The Rouge is a commonly rafted run, with fun class 3 rapids at the top. Moving further downstream, it enters the seven sisters section, named for the steep rapids it contains. The water was on the high side of good, and the rapids were big! Without any local beta to go off of, our group found ourselves not wanting to take a bite out of very many of the drops. After portaging the first couple rapids, we finally came to one that looked reasonable. The team scouted and debated how to approach it. Boof or plug? Boof or plug? Toby says plug. We all listen to Toby. 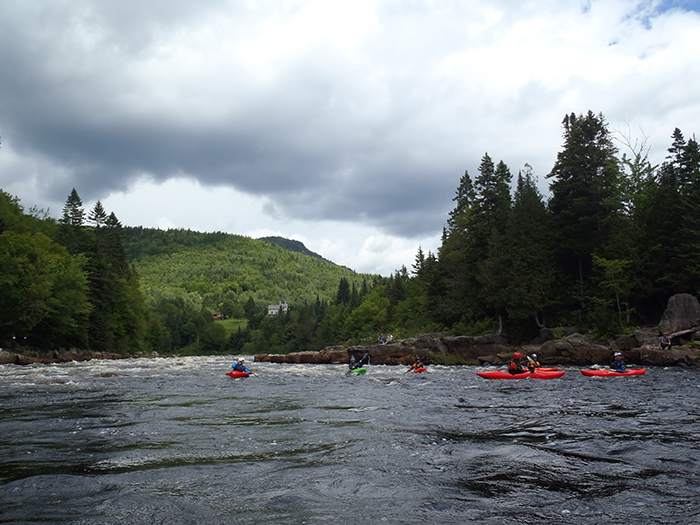 After our afternoon on the Rouge, we woke up the next morning and headed to the Tewkesbury section of the Jacques-Cartier. We met up with some local boaters and enjoyed following them down through all of the creeky lines on this classic class 3-4 run. With water levels in the area dropping out, we were stoked to finish up our run with dark skies and rainstorms. 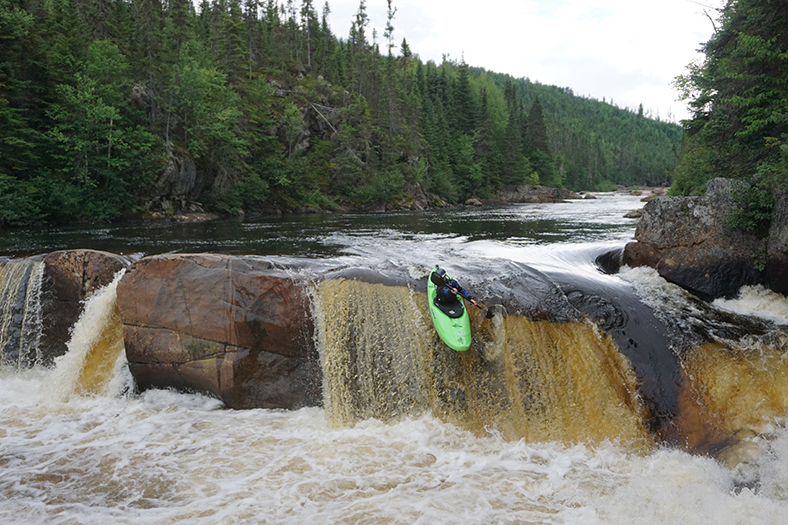 The Malbaie is not easy to get to. The shuttle is not short and roads are not paved. But if you take the time to go out there, you won't be disappointed. Our plan was to drive there, run the shuttle and put on the river and do both the A and B sections. Sounds easy enough right?  Unfortunately, it wasn't quite as simple as we'd hoped. A combination of poor road conditions and a longer than expected travel time led to us putting on the river later in the day then we would have liked.

Even with our late start, we were still hopeful we might make it through the B section with day light. That was until we got to the 30 footer. After all that plugging practice on the Rouge, I decided to go for the plug instead of the boof. Turns out, that was the wrong choice this time. I plugged the drop and popped up right in the hole at the bottom of the waterfall. After spending a short time in the hydraulic, I quickly decided I wasn't going to get out in my boat and pulled my skirt. After one or two quick recircs, I found myself suddenly in a calm place. It was dark, but not violent. I was deep in the river with absolutely no sense of up or down. I curled up, stayed patient and calm, and just hoped that I was where I thought I was. All of my previous experiences told me I was in the down flow of the hole, being sent deep but that I would eventually resurface downstream of the falls, in a safe place. After approximately 20 seconds (based on what those watching saw), I saw light. I gained a sense of what was up, and started to swim to it. As happy as I was when I resurfaced and took that first deep breath of air, I think my friends watching from the shore were probably even more relieved. While I at least had a sense of what was happening to me, they had no option but to assume the worst. I gave a few I'm ok taps on my helmet and watched the rest of the team stomp big boofs off the falls!

After finishing up the end of the Section A rapids, we got to the half-way bridge as dusk was settling in. It was an easy decision to take off there and call it a day. After dealing with our shuttle logistics (we didn't have a car at the bridge), we found a great camp spot in the dirt and posted up for the night to be ready to rally down both sections the next day. 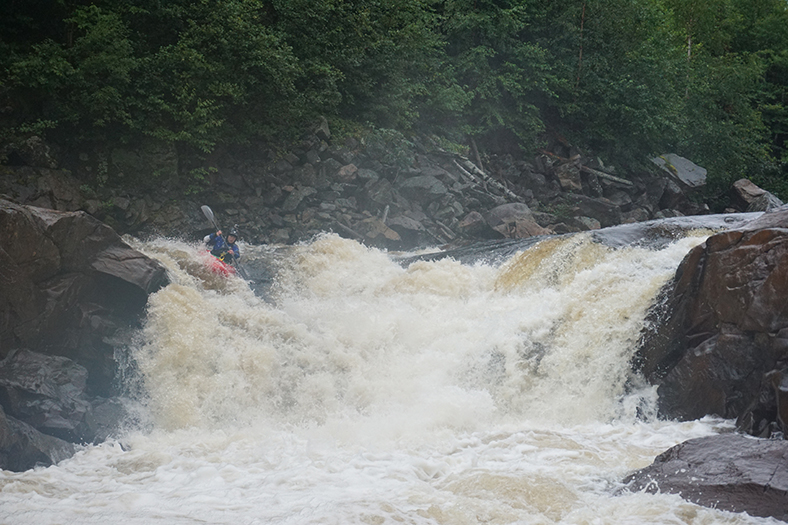 So as not to repeat our mistakes from the day before, we woke up and got started early on running the shuttle. Thankfully we had two time Silverback Champion Erin Savage with us, and savage is more than just her last name. She drove the takeout vehicle as far as it would go down the old overgrown road, jogged to the river to mark our takeout, then made her way back up, past the car all the way to the main road where the other shuttle vehicle was able to make it to pick her up. By 9:30am, Erin already had 8 miles under her belt. With that taken care of, the team made our way to the put in of Section A. We bombed down the rapids and arrived at the bridge in no time. Moving into Section B we found fun non stop boulder gardens for the first few miles and then a number of really sweet distinct rapids to finish off the day.

We took off the river at a decent time, but from there we still had a 3 mile hike to get back to the car. The "trail" was overgrown. Branches smacked us in the face on every step. Mosquitos attacked our ears. But hey, at least it was mostly flat. Can't say I enjoyed it at the time, but in retrospect it was one of my favorite experiences of the trip. I'm a sucker for that Type 2 fun.

After taking off the Malpaie, we decided to head back into Quebec City to reassess levels and accept an invite to take showers and crash under a roof at Quebec Connection's Emrick Blanchette's house. Some significant rain had fallen and the rivers that were too low just days before were on the rise. For the next two days, the classics were too high for us, so we opted for a couple of local runs that need a lot of rain to go. The first day we put on, then hiked off, the Sault à la Puce (SAP) because there simply wasn't enough water. But we did get a decent flow and paddled with a fun crew of Quebec locals on the Talayarde the next day. After enjoying a couple days in the city, we were ready to head back into the woods and made our way to the Neilson. 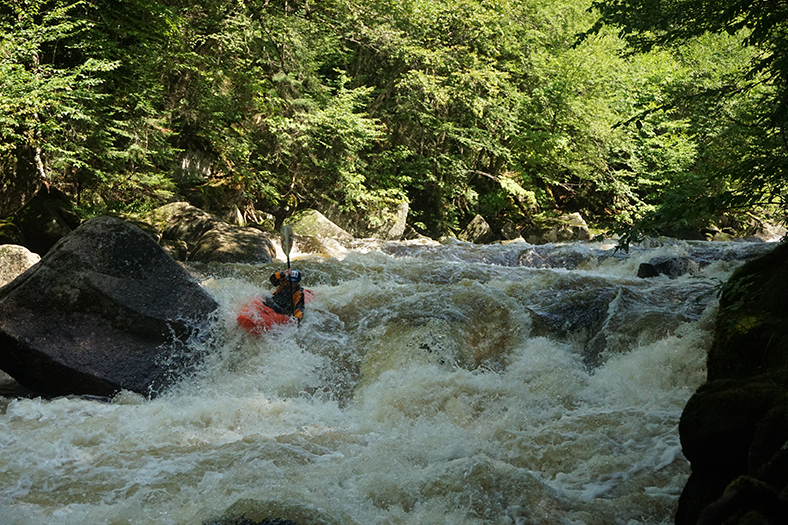 If you ask anyone their favorite Quebec classics, there is no doubt in my mind that the Neilson will one of the first rivers mentioned. Located in a beautiful valley with a distinct rock face jutting out from above, the Neilson contains endless miles of continuous class 4-5 rapids. After arriving at the river we hopped on the A Section at a water level I would call the high side of good. The rapids just kept coming and the juicy flow coupled with us not knowing the river made even the smaller rapids feel game on. After recognizing just how high quality and fun the run was, we decided to post up at the Neilson for a few days and lap the A Section while waiting for the water to drop a bit before continuing onto the slightly harder B Section. 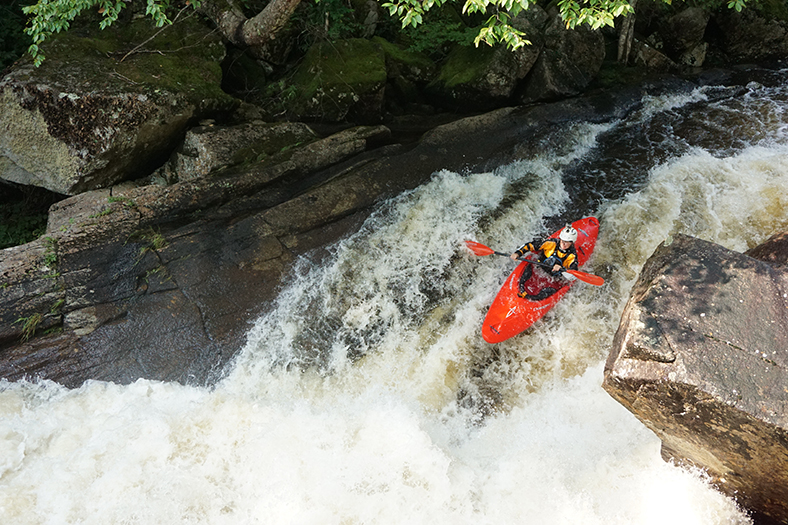 After letting the water level drop a bit, we all decided to continue onto the B Section of the Neilson on our third day at the river. Toby and Steve ran it the day before so we were able to make our way downstream with minimal scouting. While considered harder than the A Section by most, the B Section was much more pool drop and did contain a few rapids larger than anything found on the A stretch. Personally, I found it less intimidating overall, but you should probably go there and decide for yourself. Regardless, both sections contained the kind of whitewater worth traveling for and I could have run that rivers for weeks. Unfortunately, after knocking out our third lap on the Neilson, my trip was coming to an end. After a team farewell dinner at the local Poutine shack, Steve and I decided to cap off our trip to Canada with a little culture in Quebec City.

While I am not much of a city person, I do enjoy experiencing the culture of the places I travel to and sometimes sleeping in the dirt next to a river doesn't give you that (though sometimes it gives you more culture than you ever bargained for).  For this reason, Steve and I chose to grab a hotel room in the city and spend the morning before our flights seeing the sights. We ate, we drank, we walked along the only remaining fortified city walls in North America north of Mexico, and most importantly, we visited the Maple Syrup museum and sampled Canada's best syrups. It was the perfect way to end our Quebec vacation.

Who knew Quebec Canada was so awesome?! Knowing what I do now, there is no doubt that I'll be back sooner than later. The people, the culture, the rivers and the scenery all more than lived up to my expectations. Thanks to Erin, Toby, Margaret and Steve for being such a great team!