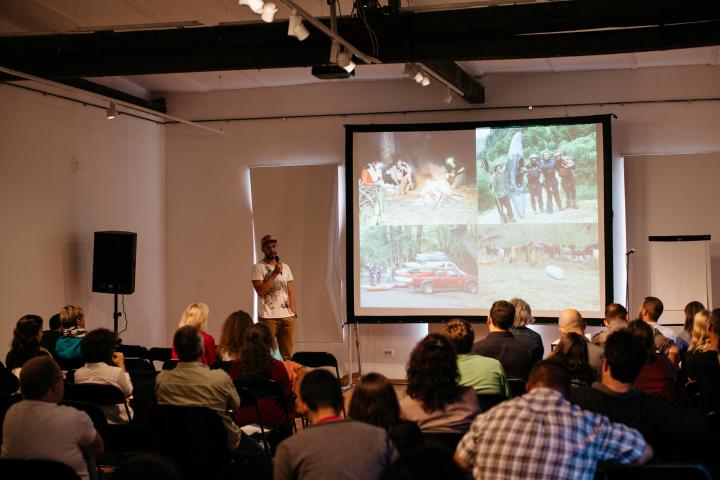 The shortest way to explain what was going on from September 24th - 27th in Serbia is to describe it as Unconventional gathering of River lovers. Imagine 120 River conservationists from 18 countries hanging out in the most amazing place just next to the mighty Sava River in the most vibrant city and the former capital of Yugoslavia - Belgrade. We were the ones representing kayaking community...

It was as fun as it looks or reads. When you have good and quality ingredients it is not hard to make a good dish with them. In our case the dish was ideas on how to fight the insatiable appetite for damming rivers in the Balkan Peninsula. It is somehow hard to imagine that there are more than 2,700 hydropower plants projected in the region; even National Parks and other protected areas are at risk! They want to put a dam to every river that was left untouched till today as they think they have a right to do it and that they are doing us a favor. Or just said simpler - they like the easy money. So who is the one against all this absurd dam craze, who is the one going to battle with big corporations and corrupted governments that don't give a damn about the treasures their countries, in difference to other European countries, still possess? We are! Kayakers, fishermen, little local NGOs and other passionate people in the campaign. There is only us, no one else will do it!

I can fit myself in all listed above, but to be honest I am most proud of the fact that I am a kayaker. This has to do with the fact that kayakers were the ones that made the difference in the field in many past battles for the rivers. We don't think and discuss too much; we simply go to action without big hesitations. Or like a respected activist Edward Abbey, who was totally against dams that devastated USA, once said: "Sentiment without action is the ruin of the soul."

Among all I believe we kayakers feel the strongest connection to rivers and their free flow. One can't be a sailor without an ocean and we can't be kayakers without wild and free rivers and we feel this in our guts. You all know the smell of the river in the morning when mists are still rising above the rapids, the haze around a waterfall that never ceases and a feeling when you see a wild trout or salmon under your boat. All that is gone when there is a wall between upper and lower stretches of the river... It feels good to know that there are more enthusiastic people like us around and that we are not alone in this. Joining forces is and will be crucial and having fishermen and conservationists for friends is not that bad at all, believe me. So lets prove that we are still the ones that river lovers can rely on when battles for rivers start.

There is a choice; we make it every day... Leeway collective's choice is organizing a Tour across the Balkans in 2016, all the way from our home Slovenia to the Albania and gather broad kayaking community to paddle these amazing rivers together, spend time with friendly locals and spread the word about this important issue across the region and in world wide media. Come join us, you know it will be fun! More info on the tour and dates will follow but April/May will be time for that. Follow us on social media or contact me directly via [email protected].

See you on wild and free rivers!