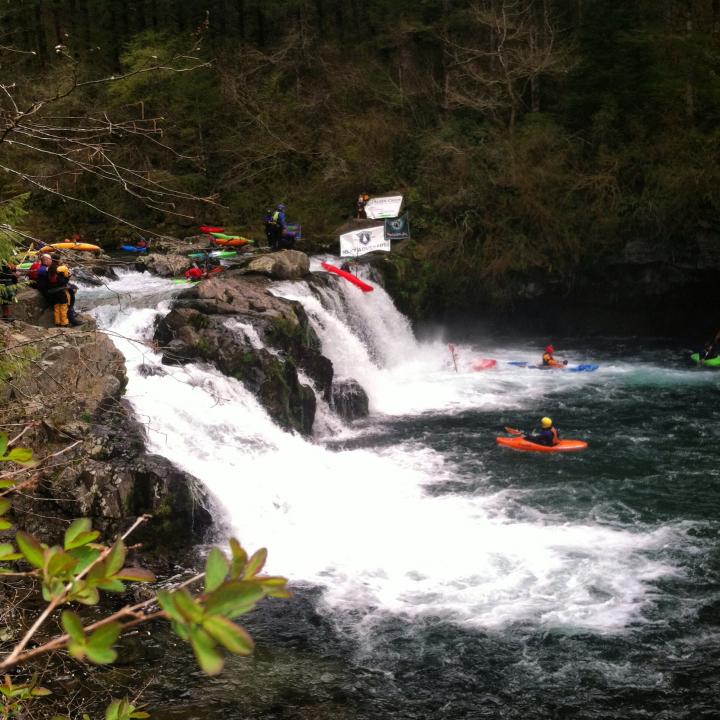 The Northwest Creeking Competition is an annual two-day gathering of paddlers from all over the Northwest, offering them a chance to test their speed and skill navigating Class IV/V whitewater on the East Fork of the Lewis and Canyon Creek.

This year was the NWCC’s 9th consecutive year, featuring the classic Downriver and Mass Start Kayak Races (long and short) that we know so well, as well as a new “Team” race in which two paddlers negotiate the course together, with the time stopping as soon as the stern of the last racer crosses the finish line. As always, there were Raft Mass Start, as well as R2 raft races, and an IK invitational “huckfest”. Each and every year I look forward to this community event, and while I was unable to race due to my shoulder, I was fortunate enough to help organize the event and hand out some fancy awards.

This year, we had over 150 racers on each course- a new record- with representation from B.C., WA, OR, MT, CA, ID, and the East Coast. Saturday’s events started with the mass-start raft and kayak races, from Sunset Falls to below the Gorge, finishing promptly at the Copper Creek Stairs.

In the mass-start kayak, the Serrasoles brothers got an early lead over Sunset Falls with Gerd coming away with the win, followed quickly by Aniol and lady-shredder Sandra Hyslap!

Team and individual downriver races started soon thereafter, with Isaac Levinson and Katrina Van Wijk taking the Pro short boat titles with clean lines and fast times, despite low water. As always, Next Adventure provided athletes and volunteers with a prime-rib and roasted vegetable BBQ, and classed it up with a raffle for the record-books! Highlight of the evening was a throw-rope stuffing duel for a new Sweet Protection drysuit! There is still debate as to what a properly stuffed throw-bag is in this case….

Sunday broke sunny and warm as racers made the transition from the low-water East Fork of the Lewis to low-water Canyon Creek. At typical flows, Canyon Creek is a mecca of cute boofs, and fun boogie with a handful of waterfalls throughout the run. However, at low-water it is a racer’s nightmare with rocky shelves and F*** you rocks abound. Isaac Levinson cleaned up for the weekend with another win in the Men’s Pro category, while stout Sandra Hyslap showed her athleticism, pulling away from Katrina Van Wijk and taking the win! From what I hear there were over 150 racers on Canyon Creek alone, offering spectators a skittle rainbow in every eddy.

Final Results and 2014 photos can be found on the NW Creeking Competition Website:

Be sure to stay tuned through the winter for updates on the 2015 Northwest Creeking Competition!